NGC 3918 was discovered by Sir William Herschel in March 1834 but how James Dunlop in his southern deep-sky survey ten years earlier missed it is a bit of a mystery. This PNe lies some 18 arcmin from the eastern border of Crux, within the narrow section of sky marking the hind legs of the Centaur. 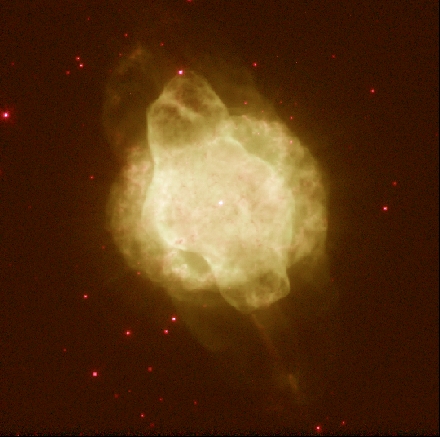 NGC 3918 ranks as my second favourite PNe because it is so bright, quick and easy to find near western Crux, and its general shape reminds me of NGC 3195 in Chamaeleon. Another attraction is its extraordinary light blue or greenish colour against the starry field, and is comparable to NGC 3132 in Vela. In my opinion, neither NGC 3195 or NGC 3918 are as prominent as NGC 3918. I have on many occasions used it for the typical example of planetary nebulae during observation sessions with my astronomy classes, and I still gasp at its colouration.

“A perfect planetary disc 6 arcsec diameter; quite sharp, with not the least haziness. It is of a most decided independent blue colour when in the field by itself, and with no lamp light and no bright star. About 10′ north of it is an orange coloured star 8th mag. When this is brought into view the blue colour of the planetary becomes intense. Shown to my attendant, John Stone, who, on being asked what colour, said at once ‘blue’…”

The next time he came across the PNe he told of his impressions, saying;

“…viewed with all the powers; very beautiful; decidedly blue.”

Herschel was fascinated with the strong colours of the planetary disk. In another observation he said; “…planetary nebula, colour a beautiful rich blue, between prussian blue and verditter green. The light is fully equal that of a star 8th mag diameter; 2 seconds in RA; 12 arcsec by careful estimation. When kept steadily at rest its outline is sharp and clean, and perhaps a very little elliptic. A feeble lamp light gives it a deep indigo contrasted colour. Ditto if a red star N.p. [north-preceding], about 10′ distant, be brought into the field with it. My attendant saw it and declared proprio motu that the light has quite a green cast in it. About 90 stars are in the field, none above 11..12 mag, and only one of that magnitude (meaning when the nebula is central). It has none but stars 16th mag near it.”

“Blue colour very conspicuous. Has one small companion certain (pos by diagram about 290 ) dist [equals] full diameter, another nearly certain (at about half the distance by diagram, and pos about 135° ) The field is full of stars. Total light of planetary [equals] star of 6th magnitude or 6’ min. A very little oval in position about 160° or 165°.”

A final observation was recorded of NGC 3918;

“Planetary nebula. Perfectly round, very planetary; colour fine blue; a very little ill defined at the edges; has no ‘satellite stars’; very like Uranus, only about half as large again and blue. Diameter in RA [equal to] 1.5 seconds.”

15cm f/8.6 Newtonian; “A colourless, perfectly round and smooth disk-shaped planetary. In the field with an 8th mag star NNW. The nebula, just fainter than 8th mag, is easy to identify; simply rack the eyepiece out of focus, and then start focussing it. As focus is approached, the disk-shaped images of both objects shrink in size. But at an obvious moment, the star continues to shrink, but the planetary remains disk-shaped. The disk is clear at 72×, and possibly even at 40×.”

25cm f/5 Newtonian (120x); “This is a very interesting object …shows it as a small, neat planetary nebula, very bright with a smooth disk and sharply terminated edges. It reminded me of a luminous coin. There is a reddish 8th mag star close-by to its north, and when viewing both in the same field, it is not impossible to imagine the nebula as having a bluish cast. Definitely a good object to study at higher powers.”

AOST2 describes the PNe as;

“…a small disk about 12″ across and the single prism image can be found in small finderscopes by blinking with an [OIII] filter. The nebula appears round, well defined and vivid blue…and lies in a fine starry field. The prism image is elliptical from the overlapped images of doubly ionised oxygen, with a trace of a central star streak. Like most of planetary nebulae…”

“NGC3918 is one of the best southern planetaries. It appears as a 30″ bright aqua ball of even surface brightness. The colour is one of the strongest that I have ever seen in any astronomical object. No central star is visible, even when listed at 13.24 mag. The planetary has a sharp edge even at high power, and no faint halo was glimpsed about the planetary though it has been photographed. A star of 10th magnitude is positioned 10′ northeast? (did not note properly) Of the nebula and was orange in colour giving a nice contrast. A scattering of 15-16th magnitude stars is positioned just southwest of the object. No OIII filter was used as previous observations had shown that it does not improve the view, it just ruins the colour. The planetary is just visible in my 90mm finder as a star. An 8″ scope will show the nebula’s colour.”

At first glance using low power the tiny ‘even-light’ circular disk reveals no structural detail. In appearance, it reminds me very much of the planet Uranus - however it is not as green. Total size is about 8 to 10 arcsec, but photographically, it extends some 19 arcsec David Frew also says, taken from in the same reference as above, “…it makes a nice contrast when using high powers.” Larger apertures will reveal the very blue colour, but no structure - even using an OIII filter. It is classed as Type 2b in the Vorontsov-Velyaminov classification, suggesting uniform distribution in brightness. A small knot or bulge, about PA 250° is suspected towards the edge of the planetary, but I have never seen it. For apertures above 40cm the planetary takes on an oval shape and is angled at about PA 300°. Furthermore, taking David Frew’s advice, the oval shape is clearly seen in the prism image, and I suspect this to be visible in apertures above 20cm.

There are a few more negative views though. In Mike Inglis’ Astronomy of the Milky Way : Observer’s Guide to the Southern Sky (2004), for example, gives an review that is a little uninspired and an appraisal that is slightly confusing - especially with the stated and incorrect 2 arcsec diameter. I say uninspiring here only because he seemingly gives the view that the observer will be rather disappointed and find it, frankly, just plain ordinary. This especially goes against the glowing reviews he gives to other planetaries in the region. Anyway he says on pg.94;

“…NGC 3918 is a rare type of nebula in that it can be seen with binoculars. However, do not expect much, as all you will see is a point of light…. But there will be something about it that just doesn’t look like a star. It may be that it is not as sharp as the images of the stars, or perhaps its blue color will give it away, and this gives it its name, the Blue Planetary. A small telescope of, say, 5 cm will show the disk of about 2 arcseconds diameter. A challenge to large binocular observers is to see if you can locate its 1lth magnitude central star. Good luck!”

In the images of Robin Ciardullo using the HST shows more structural detail, including the central star. This is reproduced with permission by Robin Ciardullo of Penn State University, and the colourised version can be seen from web site. (Fig.2 above) This latter image was taken on the 18th October 1995 which finds that the diameter extends to about 35 arcsec with some prominent wisps of nebulosity protruding at PA 330°. These ansae appears symmetrical but mirrored. According to David Malin (ex-AAO) this image is too small to usefully enhance the full extent of the outer nebulosity by unsharped masking. He was kind enough to look at the IIIa-J plates from the UK Schmidt, suggesting the nebulosity does indeed extent further out at the same PA. It is interesting to note that IIIa-J plates are selected because it is within the range of the OIII – the most prominent line of any planetary. As David states;

“It reminds me of the bits of nebulosity around NGC 3242. (Vela) A UKST image shows the nebulosity extending further – perhaps some 30 to 40 arcsec. It is larger only because the image is much deeper.”

Also the expansion velocity of the nebula suggests that the planetary is about 3 000 years old. Clegg, Harrington, Barlow and Walsh study is highly detailed on the object – using ultra-violet, visible and radiometric observations. From these we have learned the chemical composition of the nebulosity. Total mass of the nebulae is estimated to be 0.08 ΣM⊚.

NGC 3918 central PNN (planetary nebula nucleus) in some general references still say it remains doubtfully. Most listed it as 10.7 magnitude star and remains invisible to telescopes under 60cm. The major problem with the PNN is the PNe’s overall brightness swamps out its light. Other catalogues state that the central star is more like 15.6, and according to the studies made by Clegg, Harrington, Barlow and Walsh (AJ., 314, pg.551-571 (1987)) the central star is 14.6V magnitude, and to quote in how difficult it is to see the central star, they say;

“It is of high excitation and has a high surface brightness such that the central star is not seen.”

The PNN is some 6 900 times more luminous than the Sun, with the estimated surface temperature at some 140 000K. Another temperature method was determined by measuring the ultraviolet Helium (HeII) line or the Hydrogen (HII) that produces the so-called Zanstra temperature. This value is useful, as it can by theoretical means, enable the calculation of the true atmospheric temperature of the nebula. A Zanstra temperature had been calculated for NGC 3918 to be about 117 000K.

Distance has been calculated to be about 800pc or 2 600ly, and Pottasch (1983) based on this value the amount of interstellar extinction and calculated the distance as 1.30kpc. AOST2 states ’…the distance is rather uncertain; one estimate is 1 000pc.” Clegg, Harrington, Barlow and Walsh (1987) states the distance as 1.5kpc. Ciardullo and Bond at the time of writing have yet to publish their distance estimates.