Past observations by astronomers such as Lacaillé, John Herschel and even H.C. Russell have suggested that the observed difference in magnitude (Δm) was about three to four magnitudes, with the average of all Washington Double Star Catalogue (WDS06) observations being 2.49. The “average” magnitudes of the two components in the last 300 years has allegedly risen in brightness, with relatively small changes in the difference in magnitude. (See Figure 3-1) 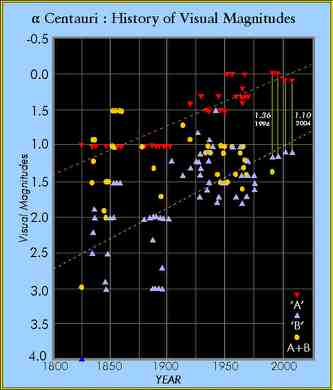 Today, it is clearly only about 1.5. My own thirty-one observations of estimating differences in magnitude, between the years 1981 and 1990, range anywhere between 1.1 and 1.8, producing an average of 1.4. Hipparcos (1996) measured this difference as 1.36, so this is about right. Why this difference is so large by these early and notable observers remain still a mystery. This problem with magnitudes is also briefly stated in Burnham’s Celestial Handbook Vol.1.

Another issue, not mentioned by Burnham, is the way magnitudes were reported through most of the 19th Century. Unlike the modern magnitude system first set of by the variable, early observers tended to use some personal magnitude scale, which could vary as much as six or seven magnitudes between several visual astronomers. These variations were analysed in 1856 by Norman Pogson — the original founder of the logarithmic magnitude scale that we use today. Here he found that the John Herschel (and to some extent William Smyth) both underestimated the brightness of all first magnitude stars. (Hearnshaw., John, B.; “Origins of the Stellar Magnitude Stars”; S&T, 84, 5, p.494-499 Nov.(1992)) It is quite possible that the companion star has brightened in the last 100 to 200 years, though such changes would be, in many aspects, contrary to our current understanding of stellar evolution. The A-component observed variability could also have an small influence on the estimates, but this should be average out instead of being so consistently out by such large amounts. Actual colour for this star may have also slightly changed from deep yellow to light-yellow / yellow, as reported by both John Herschel and Russell. (3)

Minor brightness variations for α Cen was reported in S&T., 76, 6, pg.509 Dec. 1984 in the “News Notes”, first reported in the French professional Journal “Comptes Rendus” in 7th June 1984 by the collaboration of several French astronomers. Lead by Eric Fossat, working in the European Southern Observatory in Chile discovered these small periodic variations over a six day observing window. Although the primary has the same G2 solar spectral class, however, the star oscillates slightly in brightness every twenty minutes by about 0.65 magnitudes. Such oscillations are not uncommon in G-type stars, with such brightness fluctuations have been detected in the Sun, which varies in periods around five minutes. Since discovered in the Sun in 1965, the variations have been found in several stars using high-speed photometry centred on the narrow double-yellow Sodium lines in the combined spectrum. In the Sun, this is achieved using a very small telescope attached to an electronic photometer, or bolometer), and is very useful in measuring small changes in temperatures and energy fluxes. It seems that the B-component is the culprit, whose data was subtracted from the combined light. Origins of these brightness fluctuations is unknown, but several projects in the field known as helioseismology, are slowly revealing the inner workings of the Sun and how energy and material is transferred from the solar furnace in the core up to the surface.

3.Interestingly, it is the same page as the announcement and image of the proto-planetary disk surrounding Beta Pictoris and the likely formation of its planetary system. This disk was discovered by the IRAS satellite in January 1984.